Tyrone is a Constable for the First Nations Tribal Police. He lives in the beautiful coastal range of North Vancouver with his wife Norma and their two children. He is a member of the Coast Salish Tribe of the Squamish Nation, Capilano Reserve.

Tyrone is one of eight creative brothers and, as a result, was inspired to begin carving before 10 years old under the influence of his family and the elders in the community.

Tyrone is a self-taught accomplished artist whose attention to detail and traditional style are evident in each piece he creates. He uses red and yellow cedar as his medium to carve plaques, drums, paddles, totem poles, masks and sculptures. Tyrone incorporates many family crest symbols into to his works in the hope to protect his cultural history for upcoming generations. He is a prolific artist. 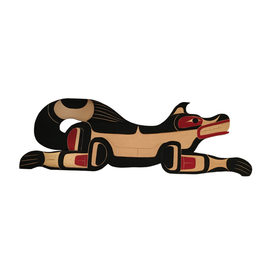 Joseph Tyrone Wolf Carving
Add to cart
Wolf Carving
C$325.00
By using our website, you agree to the use of cookies. These cookies help us understand how customers arrive at and use our site and help us make improvements. Hide this message More on cookies »