Dean Heron, born in 1970, is Kaska/Tlingit and member of the Wolf Clan from Liard, Yukon. His parents encouraged him to search out his heritage from a young age. In the early 1990’s Dean started to pursue a lifelong commitment to learning First Nation’s art with the encouragement and support of his wife. He began designing and painting at first, but wanted to learn to carve. In 2006, this took him back to the north - to Terrace, B.C. where he began formal training in drawing, design, tool-making and carving under prominent Northwest Coast artists Stan Bevan, Ken McNeil, and Dempsey Bob at the Freda Deising School of Northwest Coast Art. In the spring of 2007 Dean was recognized by the Northwest Community College with the Dr. Freda Diesing Award. He graduated from the First Nations Fine Arts program with Honour’s in 2008.

Dean’s current body of work includes serigraphs, paintings, regalia design and wood carvings. In the summer of 2007, Dean, was commissioned to paint five longhouse fronts for the community of Kitselas, BC. Dean created a piece for the Vancouver 2010 Olympics Aboriginal Venue Art Program. The 20 canvas piece entitled Northern Spirit is now on permanent display at Cypress Mountain. He recently finished another house front for Kitselas First Nation as well as 20ft x 40ft interior screen, and housefront for Waap Galts ‘ap Community Longhouse in Terrace.

Encouraged to teach, Dean began instructing at Northwest Community College in spring of 2007 He has gone on to demonstrate and teach at workshops in the community and abroad. He has been an instructor for the Freda Diesing School of Northwest Coast Art in Terrace, B.C. since 2010.

In June 2014 Dean was awarded a Visiting Artist Grant from the Burke Museum, Seattle, was a Visiting Artist at Royal BC Museum, Victoria, and Visiting Artist for the Adaka Festival, Whitehorse YK for the last 5 years. In May 2015 he was recognized by the YVR Art Foundation with the Mid-Career Artist Scholarship. 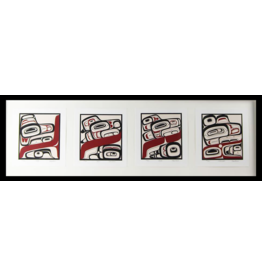