Haisla – Heiltsuk artist, Mervin Windsor, was born in Kitimat in 1964. He comes from a long line of artists originating in Bella Bella. He developed his love for First Nations art in high school. His initial inspiration came from renowned Haisla artist, Lyle Wilson, and his older brother, Ron Jr., and some friends in high school.

One of Mervin's main accomplishments was a commissioned piece he did for the Rotary Club of Kitimat to depict the four-way test (The Rotary international motto – in which they believe) in native art form. For that particular print, there were buyers from around the world, such as Great Britain, Germany, Australia, etc. Other prints, such as "Eclipse of the Moon" were purchased and sent to Saudi Arabia. One painting was purchased in Vancouver and presented to the international soccer team of New Zealand.  Also, one of Mervin's paintings of the "Spirit Bear" was presented to the former premier of BC, Mike Harcourt, after he recovered from an accident. 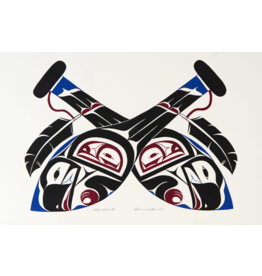 Windsor, Mervin Eagle Paddles
Add to cart
Eagle Paddles
C$300.00
By using our website, you agree to the use of cookies. These cookies help us understand how customers arrive at and use our site and help us make improvements. Hide this message More on cookies »