Terry Starr was born in March of 1951. He is from the Gispax Laats Tribe of the Tsimshian Nation. Terry's Mother was from Kitsumkalum of the Eagle Clan, and his father was from Laxkwalaams, or the town of Port Simpson, of the Killerwhale Clan. His predominant family crest is the Eagle on his mother's side, while his sub-crest is the Killerwhale on his father's. The Tsimshian Nation is located halfway north up the British Columbia coast, directly east of the Queen Charlotte Islands. Terry currently lives in Vancouver, BC.

Alu'-Alums or "Crying for or longing after something or someone", Terry was given his childhood name when he was 6 years old by the Chief of the Tribe when his grandfather passed away. Thla-enak or "It's been a long time" – his adult name was given to him by the acting Chief when Terry returned to the village after a long absence.

Terry's work has been seen in various art shows and exhibitions around North America. He has been commissioned to paint screens and logos for businesses and museums and has done carving demonstrations at museums. He works in a wide range of mediums, including woodcarvings of various kinds, massive screens, and drums.

On two separate occasions, Terry has been contracted to construct full-scale replicas of traditional Tsimshian Big Houses. For both of these projects, he was responsible for hiring and training a crew of carvers. One was for the Museum of Civilization in Hull, Quebec, and the other was onsite at the Port Simpson village where he grew up. 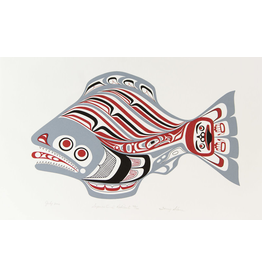 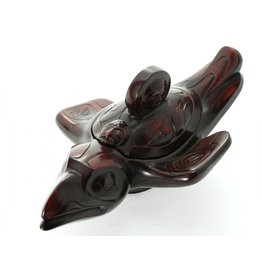