Robert Vogstad (b. 1963) lives and works in Victoria, B.C. Robert is part of the generation whose role it has been to revive the traditions of the Haida people. As part of this process, Robert worked as a Haida Gwaii Watchman living in isolation with two Haida elders in the abandoned village of Skun Gwaii (Ninstints). While staying on Anthony Island, Robert began to rediscover the culture of the Haida people. In this role, Robert gave tours and talked about the history of his nation. As a result of this, he was given the name Luptaagaa: the talkative one. 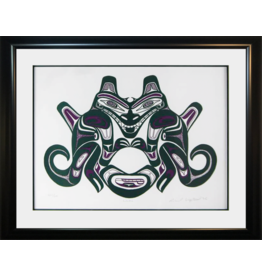 Vogstad Robert Wasco
Add to cart
Wasco
C$550.00
By using our website, you agree to the use of cookies. These cookies help us understand how customers arrive at and use our site and help us make improvements. Hide this message More on cookies »