Joshua is half Anishinaabe/Ojibwe and was born in Barrie, ON. He grew up with his Father mostly in Barrie but also went to live with his Mother in Wasauksing First Nation for short periods of his childhood from time to time. He learned to draw by doodling in his school notebooks and drawing for fun with his Brother and Mother. Most of his family are very creative. Both his Mother and Nokomis are talented quill box makers.

He was never formally trained in acrylic painting and started practicing his craft in his early 20s. He graduated from the Graphic Design Program at NSCC in Halifax, NS, in 2014 and has a passion for hand-printed artwork. He now lives in Vancouver, BC, where he works as a screen printer and paints at home.

Joshua Mangeshig Pawis-Steckley is an Ojibwe woodland artist from Barrie, ON. He is a member of Wasauksing, FN and has been living in Vancouver, BC, since 2015. He is currently an Artist-in-Residence at Skwachay's Lodge in downtown Vancouver practicing his acrylic painting and illustration techniques. His work aims to promote and reclaim traditional Ojibwe stories and teachings while modernizing the woodland style and bringing it into mainstream focus through a variety of mediums. He is an experienced screen printer and has graduated from the Graphic Design program at Nova Scotia Community College. He has had several solo exhibitions, with his latest being "Oshkimaadiziig," held at The Art Gallery of Sudbury from September to November. 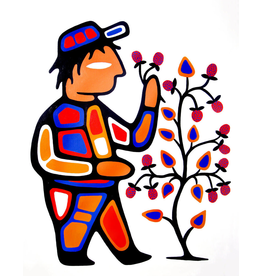 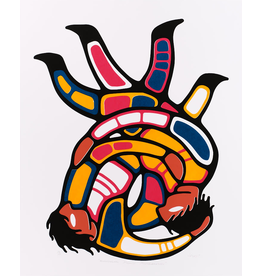