Jacob B. Lewis is a Coast Salish Native from the Cheakamus Tribe, currently residing in the pristine upper Squamish Valley Reserve, known as Cheekye IR U, located at the head of Howe Sound.

The village of Squamish is situated halfway between Vancouver and Whistler, BC, on Highway 99 in the sea to sky corridor, a 45-minute drive from Vancouver.

Jacob B. Lewis has been carving since high school in 1974. Jacob went directly on to further his art education at Capilano College located in North Vancouver. While continuing his studies for two and a half years, he was fortunate to tour Europe with the Overseas Art History Program. During the six weeks tour, he travelled to France, Holland and Britain. Jacob said his experiences abroad were a real eye-opener! He explored the finest museums in the world and as a result of this tour, he was inspired to expand his knowledge of contemporary art.

Following the completion of his studies at college, Jacob quickly became a Producing Carver; carving for various mediums on wood, bone, stone and a little bit of everything else.

The majority of Jacob's designs are his own. He uses mainly yellow cedar as his medium and completes his designs in Abalone Shell from New Zealand. The Abalone Shell is known as Paua Shell.

Jacob B. Lewis is an adaptable artist who produces almost everything from Poles, Plaques, Bowls, Masks, Reliefs and Modern Abstracts. Various collectors seek out Jacob for commissioned pieces both nationally and internationally.

Jacob B. Lewis has carved for more than a quarter of a century and is a world-renowned Master Carver of the Coast Salish Contemporary Art Movement. Jacob's works are found in numerous galleries and private collections in Canada and abroad. 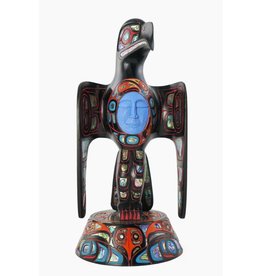