Darren Gowan has worked for over 15 years in his chosen career, growing and developing as an artist. As a young man, raised in the Caribbean and urban Ottawa, Darren began a journey that strengthened his connection to his First Nations heritage (he is Plains Cree and member of the Day Star First Nation) and found his true calling as an artist. He began carving in 1992 with antlers, bones, horns, and hooves of Deer, Moose, and Elk, and carved his first full Moose Antler in 1993. In 1997, he began working with stone. Darren Gowan continues to strive for excellence in all facets of his work. 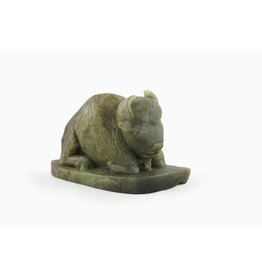 Darren Gowan Buffalo soapstone
Add to cart
Buffalo soapstone
C$400.00
By using our website, you agree to the use of cookies. These cookies help us understand how customers arrive at and use our site and help us make improvements. Hide this message More on cookies »