Dan Wallace is a Hereditary Chief and is a descendant of the Cape Mudge Laich-kwil-taich and Haida Nations. His crest is the Double-Finned Killerwhale. Coming from two distinct cultural backgrounds, Dan has an abundance of creativity to draw upon. He was raised in the Wei-Wai-Kay Village on Quadra Island by a family of carvers, including Ruben Wallace, Geoff Wallace, and Tom Wallace. He is mostly self-taught and has been carving as a full-time artist since 2000. His influences include Derek Wilson, Hank Robertson, and Reg Davidson. Dan was featured in the comprehensive Totems to Turquoise exhibition at the American Museum of Natural History in New York City, NY, in 2005. Furthermore, one of his silver carvings was selected for the front of the exhibition catalogue. This significant show was also at the Vancouver Museum from October 2006 to March 2007. In the autumn of 2007, Dan began teaching the Northwest Coast Aboriginal Jewellery Program at the Native Education College in Vancouver, BC. In 2009, Dan was included in the Continuum: Vision and Creativity on the Northwest Coast exhibition at the Bill Reid Gallery in Vancouver, BC. 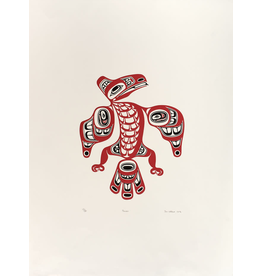 Wallace Dan Raven
Add to cart
Raven
C$150.00
By using our website, you agree to the use of cookies. These cookies help us understand how customers arrive at and use our site and help us make improvements. Hide this message More on cookies »