Arianna Johnny-Wadsworth, the founder of the Native-owned business Quw'utsun' Made (also pronounced as "Cowichan"), was taught at a young age to engage in traditional practices. With these precious teachings, she formed her identity as a Quw'utsun' medicine woman. Born in British Columbia on unceded Coast Salish territory (inalienable tribal lands), Johnny-Wadsworth learned essential herb-gathering techniques from her grandmother and local matriarchs, which later proved critical to her success in starting her business. She now uses traditional plant medicines local to Coast Salish territory, such as devil’s club and nettles, to heal the community. 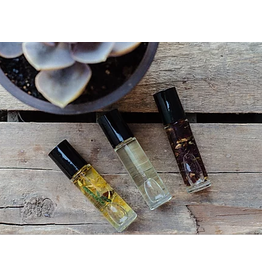 Arianna Roll On Oil
Add to cart
Roll On Oil
C$15.00
By using our website, you agree to the use of cookies. These cookies help us understand how customers arrive at and use our site and help us make improvements. Hide this message More on cookies »