Haida artist Alvin Adkins has been creating distinctive, bold and unique works for more than 30 years. Celebrated for his high-quality gold and silver jewelry, he is also a talented argillite and woodcarver and creates silkscreen prints that underscore his attention to detail and imaginative approach to design. His work is in demand by collectors, and he contributes many artworks to his community to raise funds and awareness for First Nations art and culture.

Alvin was born in Prince Rupert, British Columbia, Canada, in 1959. Beginning his career as an artist in 1971, Alvin has been counselled by distinguished colleagues such as Dempsey Bob, Frieda Diesing, Bill Reid, Robert Davidson and Don Yeomans. Alvin has established himself as a prominent artist whose style reflects intricacy, experience and quality.

Currently, he is putting most of his time toward carving jewelry pieces sought after by many Northwest Coast Native art collectors. After a long hiatus, Alvin has recently begun carving cedar. He completed his first cedar panel this summer.

During Alvin’s career as a Haida Artist, he has contributed many of his works back to his community to raise awareness and funding to ensure that his culture’s art continues. In 2010, Alvin received the esteemed “British Columbia Achievement Award” for First Nations' Art. He is one of the many Haida artists who, through maintaining the traditional Haida carving style, is aiming to preserve his heritage for future generations. 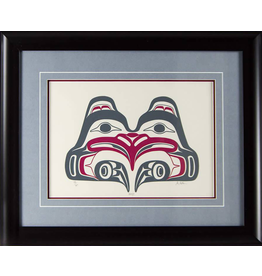 Adkins Alvin Eagle
Add to cart
Eagle
C$420.00
By using our website, you agree to the use of cookies. These cookies help us understand how customers arrive at and use our site and help us make improvements. Hide this message More on cookies »