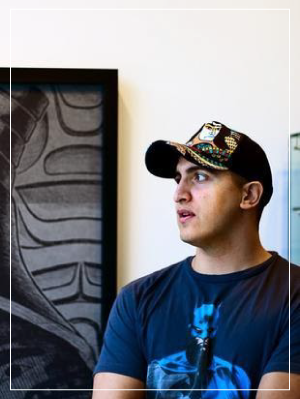 Alano Edzerza is a Tahltan multimedia artist and entrepreneur based in West Vancouver, British Columbia. He has had numerous group shows and solo shows in Canada and abroad and is one of the key artists in the contemporary northwest coast art movement.

Alano cemented the reputation of his growing company during the 2010 Olympic Winter Games when he designed the outerwear for the Dutch Olympic team.

He is the owner and director of Edzerza Gallery, Edzerza sports and Edzerza Artworks and has been running his own business since 2007. Recently, Edzerza Gallery has moved from the downtown Vancouver location to a fully operational online store and gallery, edzerzagallery.com. The Edzerza Artworks business plan and proposal has been set up since starting the gallery. Ongoing activities have included art production, sales, wholesale and as of late focusing on online retail sales.

Edzerza has taught and volunteered with the youth organizations KAYA (Knowledgeable Aboriginal Youth Association), the Freida Diesing School for Northwest Coast Native Art and NYAC (Native Youth Arts Collective) as well as been a judge for the YVR Art Foundation Scholarship for young Native artists. In 2009, he was the recipient of the 2009 30 & Under Entrepreneur of the Year Award.

No products found...
By using our website, you agree to the use of cookies. These cookies help us understand how customers arrive at and use our site and help us make improvements. Hide this message More on cookies »